The End of a War and the Beginning of Another: The New World Order After 1945


Recently, Europe celebrated 70 years since the Allies landed in Normandy. This event was very much awaited by those states which were hopelessly fighting for almost five years in the war Hitler started. Thus, the Allied landing raised new hopes that Germany would eventually be defeated. Even the American President Roosevelt was equally confident that defeating Germany and Japan was only a matter of time. Yet, besides the final victory, the Allies had another great task before them:to create the new world order after the end of the WW2. The different views of the Anglo – Americans and the Soviets on the subject would lead to a premature strained relationship between the former Allies and also, to a new postwar conflict:the Cold War.

The US and the New World Order

Whereas the Americans were concerned, they had to solve the problem of the American position in the New World Order. Roosevelt as well as the American people were very much expecting that the US would be the greatest postwar power. Moreover, they wanted to impose a durable peace which would ensure the American prosperity. Yet, were the Allies to make the same mistakes as 30 years before at Versailles, they would never achieve a durable peace. That is why the Allies were very much aware of the fact that the new peace implemented after Germany’s demise should be very different, in order to avoid the 1920s European economic turmoil and the rebirth of the militarist spirit which made possible the appearance of the totalitarian states.  Therefore, the American Administration had the ambition to impose a New World Order which would meet the interests of the US:by increasing the American national power and wealth and through the promotion of the American values in the world, especially in Germany and Japan.

The American Interests Dictated how the World Was Rebuilt Economically

The US decided to use an important instrument in order to create the New World Order:rebuilding the world economic system on principles such as free trade and the stabilization of the exchange rate. The American perspective was implemented during the Bretton Woods Conference of July 1944 where the representatives of 44 states from the so-called “free world” approved of an American project to organize the postwar monetary system.

According to the American leaders involved in organizing the conference and in laying down the economic accord (the foremost politicians were President Roosevelt, Henry Morgenthau and Harry Dexter Dexter), Bretton Woods should have been the economic basis of the future cooperation between the US, the UK and the USSR. The great economist John Maynard Keynes represented the British to the Conference who eventually accepted the American vision, yet the Soviets were not very involved, since their regime was based on a centralized economy. Every person present at Bretton Woods was very much aware of the fact that the new economic system was designed so as to tend to the long term interests of the US. Yet, the leaders of the “free world” reached a consensus, since they understood that a system which was potentially good for the US could also be good for the rest of the world. The most famous results of the Bretton Woods Conference are naturally the International Monetary Fund and the World Bank.

If the economic side of the New World Order was established at Bretton Woods by experts in the field, the political side was taken care of by the American President Franklin Roosevelt. His view comprised essentially a condominium of the three world powers – the US, the UK and the USSR – which was mandatory, in order to maintain peace and to deter eventual aggressions. With this aim in mind, Roosevelt concentrated his efforts on the UN project, thus showing to the American public and to the Wilsonian idealists that after the WW2, the US would be totally involved in governing the postwar world and would not relinquish its responsibilities and isolate itself as in 1919 when Washington left the Europeans to their own devices (with tragic results).

Yet, Roosevelt was aware that this future cooperation between the Americans, the British and the Soviets could be difficult. For instance, the British were firm in not compromising on their colonies;yet, the better relationship between Churchill and Roosevelt would alleviate the negotiations. On the other hand, the Soviet – American relations were complicated by the mutual distrust between Stalin and the American President. Roosevelt knew beforehand that Stalin would insist on certain issues which the American public and the Administration would view with skepticism and even aversion. One of these major problems was the fact that Stalin had the ambition to create a “cordon sanitaire” on the Western border of the USSR which was, in fact, a sphere of influence. Another big issue was the redrawing of the Polish frontiers which the Soviets wanted to push further west. The Polish question challenged one of the basic principles on which the American policy was built – the right to self-determination. Warsaw would lose it, were the Soviets be allowed to do as they please with the Polish territory.

However, Roosevelt had some advantages over the USSR. First of all, he allowed China to enter the United Nations Security Council, in order to check the British in the Far East by using the anti-British Imperialism stance of the Chinese foreign policy. Furthermore, FDR was not 100% sure of the relation between the US and the USSR, yet Washington enjoyed the temporary advantage of the nuclear bomb.

In the end, this was the American perspective of the Postwar Order. What was the Soviet view? Stalin was certainly indifferent to certain issues. For instance, because of the centralized regime he imposed and since the USSR could not find its place in a free economic order, he did not care too much for the problems of the international economic system or the free trade. The Soviet Union desired for itself autonomy, so as not to depend on any other state or world economic organization. 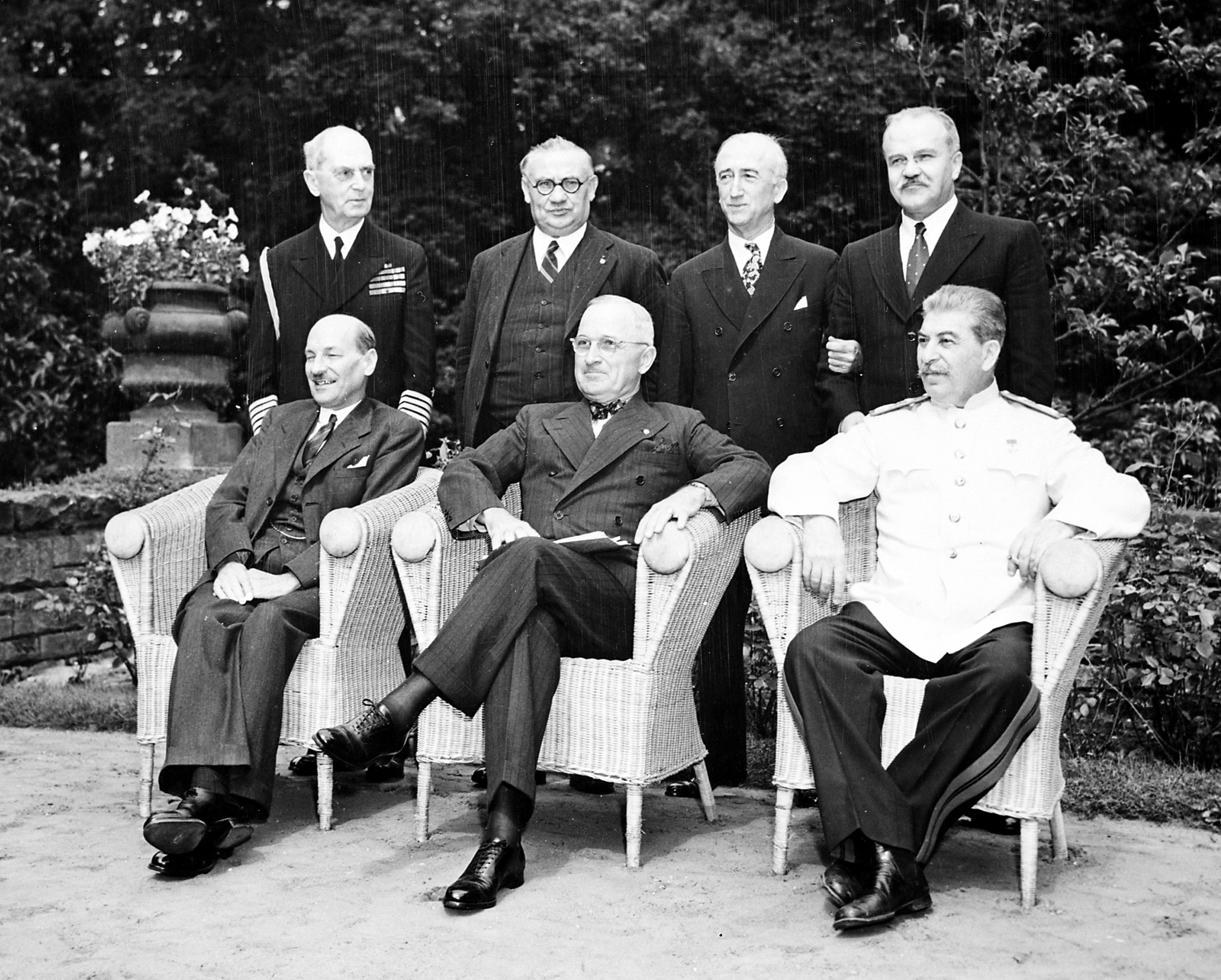 Whereas the UN was concerned, the situation was far more complicated than it appeared on the surface. Stalin was not opposed to this international organization as long as the USSR was able to protect its interests in the General Assembly (Stalin wanted to receive enough votes there) and the Security Council (veto power). On the other hand, Stalin knew clearly what his objectives at the end of the war were:he wanted to achieve complete victory over the German state and to take advantage of the German economy so as to ensure the recovery of the war-torn Soviet economy. Thus, Germany was to be occupied. Moreover, Stalin did not want to relinquish several territorial conquests:the Baltic Republics were to be added to the USSR as well as the Romanian and Polish territories lost after the WW1. These territories on the Western frontier of the Soviet Union were to be ruled by “friendly” governments which would not affect the Soviet interests. Stalin had the ambition to create a similar “cordon sanitaire” on the South – Eastern (Turkey, Afghanistan, Iran) and Eastern (after winning over Japan) Soviet border, yet the situation there turned out to be much more complicated than expected.

Stalin managed to cooperate better with the English:the Moscow agreement for the division of the spheres of influence was rapidly reached “thanks” to Churchill’s pragmatic way of thinking. Churchill would satisfy Stalin’s ambitions in Eastern Europe as long as he thought he was protecting British interests. Although Roosevelt seemed to understand the Soviet claims, he would not give up as easily, thus straining ever more the relationship between him and Stalin.

The situation changed when Roosevelt passed away just before the Allied victory over Germany. His successor, Harry S Truman, was not prepared to tackle major foreign policy issues from his position of Vice-President. Yet, he had to take up the challenge of being the President of the US in the times when Washington was expected to implement a New World Order. Truman had no reason to change the Bretton Woods Accords since they were based on democratic principles, but his real challenge would come from the conduct of the relationships with the USSR. Although Truman was an anti-Communist, he was very careful not to reveal his real stance from the beginning. On the other hand, during the American – Soviet negotiations, he wanted to ensure that the US would not cede too much without receiving anything in return (opinion shared by many of his closest advisers such as W. Averell Harriman, the American ambassador to the USSR).

In the end, Truman approved of his advisers’ view of being very firm with the Soviets and his new policy was implemented on the day he met Molotov. At that moment, the Soviet ambassador realized that Roosevelt’s death drastically altered the American policy. Afterwards, at the negotiations in Potsdam, Truman seemed to trust very much his former Allies, since he felt at ease telling Stalin about the new atomic weapon of the United States. The explanation is self-evident:the American President was aware that his country was the most powerful in the world and that it possessed the means to win on its own the war against Japan. Yet, even though Stalin seemed to ignore Truman’s disclosure, he must have surely realized the importance of the American advantage. Under these circumstances, the Second World War was officially over on August 6thand 9th, 1945, yet the New World Order had not been yet established.

This new order would be established by the evolution of the relations between the former Allies and through the appearance of a new tacit, yet very visible conflict, regardless of the plans the US or the USSR devised up until that moment.