Nazi Germany and Latin America? What does one have to do with one another? You think as you read the title of this article. Yet, you will be surprised to learn that in the 1930s, Nazi Germany managed to dominate economically and even politically the South American republics. The latent conflict between the United States of America and the Third Reich reached its most dramatic stage when it was developed territorially in the American Backyard as the countries to the South of Rio Grande were called in Washington.

The US and Germany shared one of the most important and probably iconic conflicts of the 1930s. Their problems were symptomatic for the increasingly divided world they developed in:the Berlin – Rome – Tokyo Axis vs the Democratic Front. Berlin and Washington were the leaders of these state groupings, since they shared – especially during the 1938 – 1939 – the fundamental enmity of the regimes their countries had. The Third Reich seemed to implement everything the US was fighting against and to defy every warning Washington sent Berlin’s way to respect its vital interests.

However, political and ideological adversity was surpassed by what Germany was trying to achieve in Latin America. Hitler knew that the South American republics represented US’s vital interests, yet he believed that Washington would not make a move against its aggressions, because of the Neutrality Bill. Yet, Hitler was unable to understand that, if the United States felt its vital objectives under attack, it would do whatever it could, regardless of the principles of neutrality and isolation on which the American foreign policy was based, in order to restore the status-quo ante or a status-quo favorable to itself. When Berlin entered the realm of the American Backyard, the Americans started to understand that Germany was indeed a real danger and their supposed “strategic invulnerability” was non-existent. The two oceans could not ensure the American security anymore and thus, a real offensive should begin against the German advances.

Thus, Roosevelt declared that "the United States must be prepared to resist attack on the Western Hemisphere from the North Pole to the South Pole, including all of North America and South America. As a result of world events in the last few years, and as a result of scientific advancement in waging war, the whole orientation of this country in relation to the continent on which we live - in other words from Canada to Tierra del Fuego - … has had to be changed . . . Any possible attack, " he added, "has been brought infinitely closer than it was five years or 20 years or 50 years ago”[1].

If the relations between Washington and Berlin were not strained enough, the Third Reich’s interest for South America brought them to the critical point of deadlock. In the year 1934 – 1935, Berlin sent a delegation of experts to every Latin – American republic with the exception of Paraguay and Bolivia, in order to consolidate their status as a source of raw materials for Germany, materials which would be traded according to the German economic practices systematically dismissed by Washington. Moreover, the Nazi experts established a system called Ausländersonderkontoswhich brought financial gains only to Berlin and losses to the South American countries. They estimated that Berlin would make an annual profit of 300 to 400 Reichsmarks which would be a welcome addition to the ever decreasing number of foreign currency the Reich had in its treasury.

On the other hand, through this action, the Nazis aimed at building a favourable image of the new Germany which was presented as a country with non-violent objectives, even though it heavily interfered with the American sphere of interest. By this, Berlin managed to impose its will in 14 of the South American republics where Washington’s status as an exporter declined in relative or absolute terms. However, Nazi Germany was unable to penetrate economically Cuba, Peru, Mexico or Panama, since they had secure markets which were able to withstand the German advances. Thus, in 1935, Berlin’s imports from Latin America grew with a whopping 37, 48% compared to 1934 while the ones from the USA fell by 6, 57%.  This rise was very much disliked by the American investors and exporters who pressed the State Department many a time to do something about it.

And this, of course, was just a glimpse of what Nazi Germany was doing in Latin America in the economic sphere, since the political one was much more complicated. TheAuslandorganisationsof the NSDAP infiltrated the South American political scene and its societies managing thus to undermine the domestic security of those states. The Third Reich suddenly turned into a very direct, close and identifiable danger. Nazi-inspired political organisations managed to bring about an uncertainty about the Volksdeutsche’s (Germans who lived abroad) political and state loyalties.

1938 was the year when both the US and Latin America realized how close and powerful the danger posed by Nazism was. Brazil was the country chosen for this display of force between the US and Nazi Germany. In 1937, the President Getulio Vargas introduced the Brazilian Estado Novo which aimed to be independent in its foreign policy, yet in 1938, a coup d’etat orchestrated by the Integralist Party took place so as to orient Rio de Janeiro to the Axis. The Integralist Party was based on an ideology close to Nazism and Fascism and thus, it was and still is believed that Berlin was behind this move, although the German undermining has never been clearly proven. A conflict between Brazil and the Third Reich ensued, until the German ambassador to Rio de Janeiro Ritter was declared persona non grata and had to leave immediately the Brazilian soil. 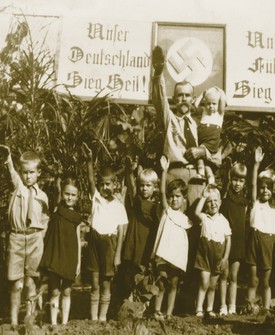 Moreover, on March 18th, 1939, Berlin seized the opportunity and bought the oil Mexico had nationalized when the UK boycotted its move. Therefore, Washington further realized how close to an actual attack from the Nazis they actually were and how it could affects its domestic and external security. Nazi Germany appeared to be everywhere and it seemed to have planned its every single move as well as its parteners’: Fascist Italy and Imperial Japan. Roosevelt denounced these states as “bandit nations” which agreed between themselves to divide the world into spheres of influence: Japan would take Asia and the Reich Central and Eastern Europe. FDR was not very far from the truth, since in Berlin in November 1940, Nazi Germany, Japan, Italy and USSR were trying to reach an agreement as to how the world should be divided after their “unholy alliance” would win the WW2. USSR, however, was given Central Asia and nothing more and it seemed obvious that, at some given point, Germany would deal with this problem heads on by an attack as it did on June 22nd, 1941.

Yet, what was not very obvious to the USA or the UK is that the Axis was not a real alliance, it was more of a propagandistic construct which served the purpose of making the whole world believe in an alliance between the aggressive nations who disregarded the traditional norms of conduct in the International Relations. However, they had very different objectives and outlooks on how to achieve them whereas a real alliance should have had common goals and means to get there.

Hitler’s error in assessing the American objectives was that he thought that nonintervention in Europe meant also nonintervention in its Backyard, even if it was an attack on its most vital interest. Therefore, Latin America and Nazi Germany enjoyed a very close relationship which was forced by Berlin’s political and economic practices which aimed at replacing Washington as the Great Power of the American continent. Yet, although Berlin’s actions gave the South American republic and the US a chance to come together, in order to protect their soil, states such as Argentina or Chile received with open arms Nazi fugitives such as Adolf Eichmann.